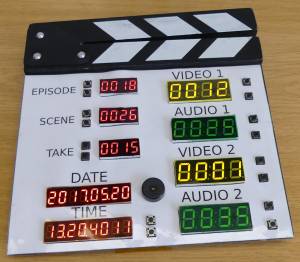 The digital clapperboard is just a wooden clapperboard using digitally controlled displays instead of having to write the take information the board.

A simple trick to help with this is to have a clap, for example just by clapping hands. This produces a sharp short sound easily identifiable on the audio track, and on the video recording the clap is also visible. You can then synchronise the two recordings, with a precision of up to a frame. Furthermore the video camera often also records audio, and since the clap is loud it is also present in this audio track, allowing synchronising the audio tracks themselves with a higher precision than frame-based (although it will not be “visible” in the resulting mix).
I actually even wrote a script which does this automatically, provided the two corresponding recordings.

The other difficulty is that you need to keep track of which audio recording corresponds to which video recording. This is where the clapperboard comes into play. There you can write which take you are currently recording (and other information such as scene, date, …) which is visible on the video recording, and have someone announce it so to be also present on the audio recording.

One problem remains though: you have to ensure the recordings are synchronous so to prevent drift over time. For short period recording this drift might be negligible, but for long period you can either have a final clap to synchronize after-hand (e.g. in movie production), or use a common time source such as the mains frequency (e.g. in broadcast television). 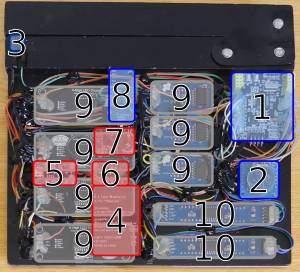 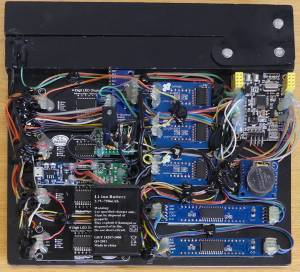 As base an inexpensive wooden clapperboard is used.

To display the numbers 7-segment displays are used because they are simple and bright:

The date and time are retrieved from a tiny RTC module based on a DS1307 (archive), with battery to keep the RTC running (periph. 2). This module also provides an I2C EEPROM (AT24C32) which is used to save the numbers.

The numbers (and seconds) can be adjusted (and disabled) using up and down buttons in the front (multiplexed in a 4×4 matrix). A button at the clap also detects when the clapped is action (periph. 3), cause the buzzer in the front to Morse the scene and take numbers.

Everything is controlled by a STM32F103 micro-controller-based core board (periph. 1). The source code is available in the git. This firmware release also include binaries and documentation.

The prototype used off-the-shelve modules (displays, micro-controller board, RTC, …) linked with wires. The next version would used a proper dedicated board replacing the board (just reusing the clap), removing the need of wires.